A quick view of the most influential metrics in Hurst.

Hurst is a city in the U.S. state of Texas located in the densely populated portion of northeastern Tarrant County and is part of the Dallas–Fort Worth metropolitan area. It is considered a Dallas and Fort Worth suburb and is part of the Mid-Cities region. It is 13 miles from the Dallas/Fort Worth International Airport. As of the 2010 census, it had a population of 37,337.

The City of Hurst is surrounded by other communities including Bedford, Euless, Fort Worth, Richland Hills, North Richland Hills, Grapevine, and Colleyvile. Hurst’s education system is sponsored and served by the Hurst-Euless-Bedford Independent School District, while other school districts Grapevine-Colleyville ISD and Birdville ISD serve the far north and far west portions.

Places of importance inside Hurst include the Tarrant County College campus that was built in 1961, the newly constructed Tarrant County Northeast Courthouse, the headquarters of Bell Helicopter (considered to be in the city limits of Fort Worth), The Hurst/Bell Station (opened in September 2000) that is jointly owned by the Dallas Area Rapid Transit and the Trinity Railway Express. The city’s premier shopping centre, North East Mall that was ranked the #1 Shopping Mall in Tarrant County and is the third largest mall in the state of Texas. The North East Mall opened in March 1972 (sources vary), is owned by the Indianapolis-based Simon Property Group. Hurst’s only cinema complex, the North East Cinemark Rave 18 opened in 2004.

Respectively in 2012, Hurst was ranked at #48 as one of the Best Dallas Suburbs according to D Magazine.

View our selection of available properties in the Hurst area.

Check out the latest demographic information available for Hurst.

Get to know Hurst better with our featured images and videos. 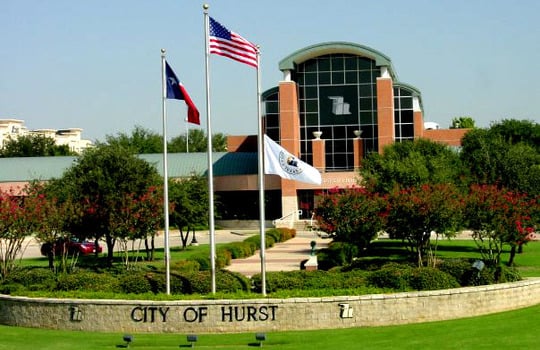 Learn more about schools near Hurst complete with ratings and contact information.

The Best in Hurst

Browse through the top rated businesses in the most popular categories Hurst has to offer.