A quick view of the most influential metrics in San Antonio.

San Antonio, officially the City of San Antonio, is the seventh-most populous city in the United States, and the second-most populous city in both Texas and the Southern United States, with more than 1.5 million residents. Founded as a Spanish mission and colonial outpost in 1718, the city became the first chartered civil settlement in present-day Texas in 1731. The area was still part of the Spanish Empire, and later of the Mexican Republic. Today it is the state’s oldest municipality.

The city’s deep history is contrasted with its rapid recent growth during the past few decades: it was the fastest-growing of the top ten largest cities in the United States from 2000 to 2010, and the second from 1990 to 2000. Straddling the regional divide between South and Central Texas, San Antonio anchors the southwestern corner of an urban megaregion colloquially known as the “Texas Triangle”.

San Antonio serves as the seat of Bexar County; recent annexations have extended the city’s boundaries into Medina County and, for a tiny area near the city of Garden Ridge, into Comal County. Since San Antonio was founded during the Spanish Colonial Era, it has a church (San Fernando Cathedral) in its center, on the main civic plaza in front, a characteristic of many Spanish-founded cities, towns, and villages in Spain and Latin America. As with many other urban centers in the Southwestern United States, areas outside the city limits are sparsely populated.

San Antonio is the center of the San Antonio–New Braunfels metropolitan statistical area. Commonly called Greater San Antonio, the metro area has a population of 2,473,974 based on the 2017 U.S. census estimate, making it the 24th-largest metropolitan area in the United States and third-largest in Texas. Growth along the Interstate 35 and Interstate 10 corridors to the north, west and east make it likely that the metropolitan area will continue to expand.

San Antonio was named by a 1691 Spanish expedition for Saint Anthony of Padua, whose feast day is June 13. The city contains five 18th-century Spanish frontier missions, including The Alamo and San Antonio Missions National Historical Park, which together were designated UNESCO World Heritage sites in 2015. Other notable attractions include the River Walk, the Tower of the Americas, SeaWorld, the Alamo Bowl, and Marriage Island. Commercial entertainment includes Six Flags Fiesta Texas and Morgan’s Wonderland amusement parks. According to the San Antonio Convention and Visitors Bureau, the city is visited by about 32 million tourists a year. It is home to the five-time NBA champion San Antonio Spurs, and hosts the annual San Antonio Stock Show & Rodeo, one of the largest such events in the U.S.

The U.S. Armed Forces have numerous facilities in and around San Antonio; Fort Sam Houston is the only one within the city limits. Lackland Air Force Base, Randolph Air Force Base, Lackland AFB/Kelly Field Annex, Camp Bullis, and Camp Stanley are outside the city limits. Kelly Air Force Base operated out of San Antonio until 2001, when the airfield was transferred to Lackland AFB. The remaining parts of the base were developed as Port San Antonio, an industrial/business park and aerospace complex. San Antonio is home to six Fortune 500 companies and the South Texas Medical Center, the only medical research and care provider in the South Texas region.

View our selection of available properties in the San Antonio area.

Check out the latest demographic information available for San Antonio.

Get to know San Antonio better with our featured images and videos. 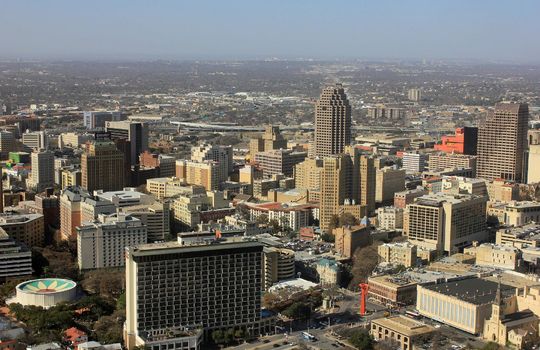 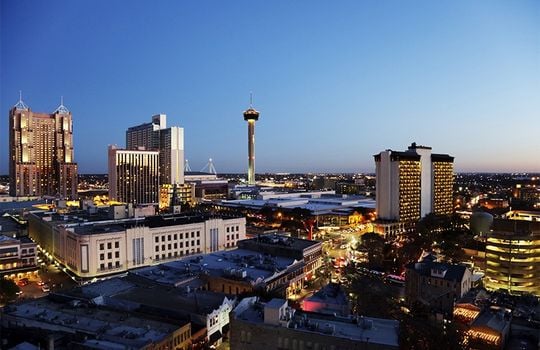 Learn more about schools near San Antonio complete with ratings and contact information.

The Best in San Antonio

Browse through the top rated businesses in the most popular categories San Antonio has to offer.